With the last seven heats to go in the pros double elimination, the day promised to be an exciting one from the start. Unfortunately the wind didn’t play ball in the beginning and even though it was possible to launch the competition already in the early morning, there had been several set backs due to the conditions being on and off throughout the remaining day.

In the U16 juniors division Tigo Kort was proving his potential in his heat against fellow countryman Bodhi Khempen and in his fight against Lennart Neubauer (Starboard), who was not only winning the juniors double elimination, but also marked down his best result ever in the pro fleet, being placed 9th. Neubauer displayed a huge set of skills in varying conditions and well deserved the first place in the U16 and a top amongst the top 10 pros. 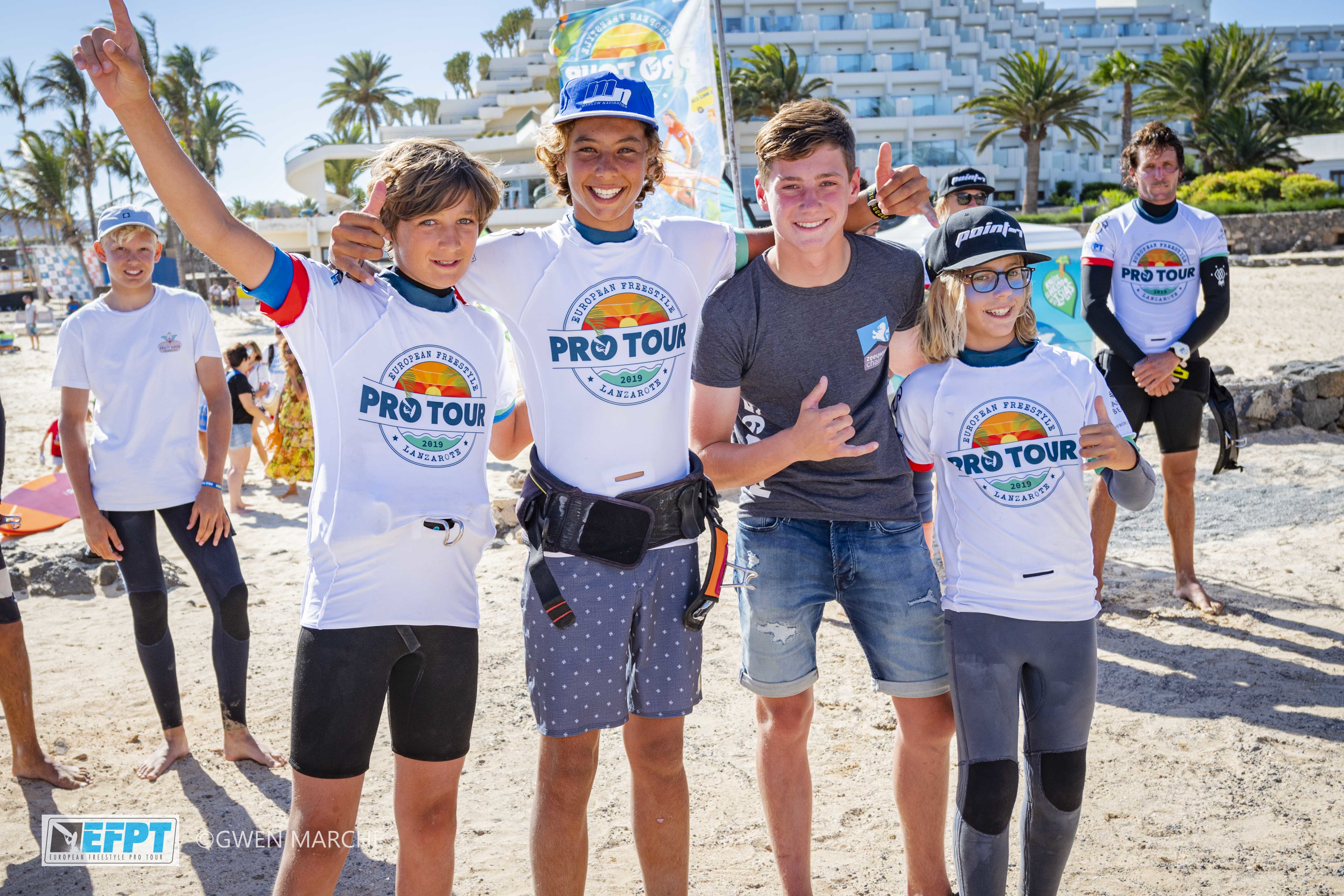 In the U18 division Nil Bacon Aubert marched through the double, taking down Stefan de Bell (Patrik) and defeating Eugenio Marconi twice, to take victory here. It were two close battles between the Italian and the Frenchie, but it favored Bacon in the end. 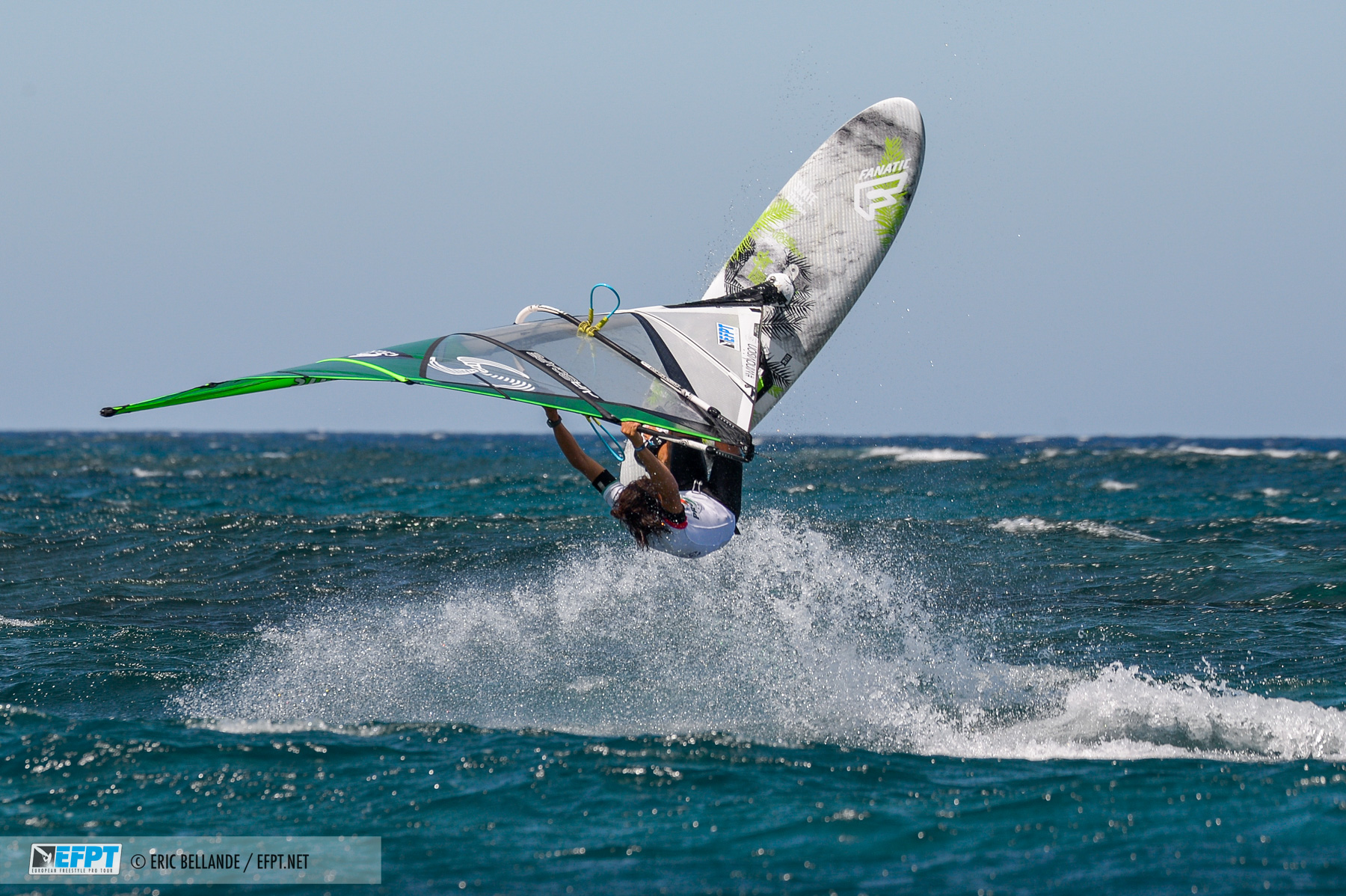 In the pro fleet, Antony Ruenes commenced his run through the double elimination, taking down Steven Van Broeckhoven (Gunsails/Starboard), Jacopo Testa (RRD/RRD) and Antoine Albert (Goya/Goya), ending their hopes for the podium here at Costa Teguise. Even in the lighter, challenging conditions Ruenes layed down his moves consistantly and with a lot of style and dispatched all of his opponents, until he had to face tour-leader Yentel Caers. Caers had been a force of his own on tour in 2019 and even though the Frenchie put on a decent fight for second or third place, he had to let the Belgian pass. Caers landed a pasko, culo and shaka360 to count on porttack and a double culo, spock culo and an air funnel burner to count on starboard. With 36,19 over 34,62 he succeded over Ruenes to once again face Adrien Bosson (Duotone/Fanatic) in the final. 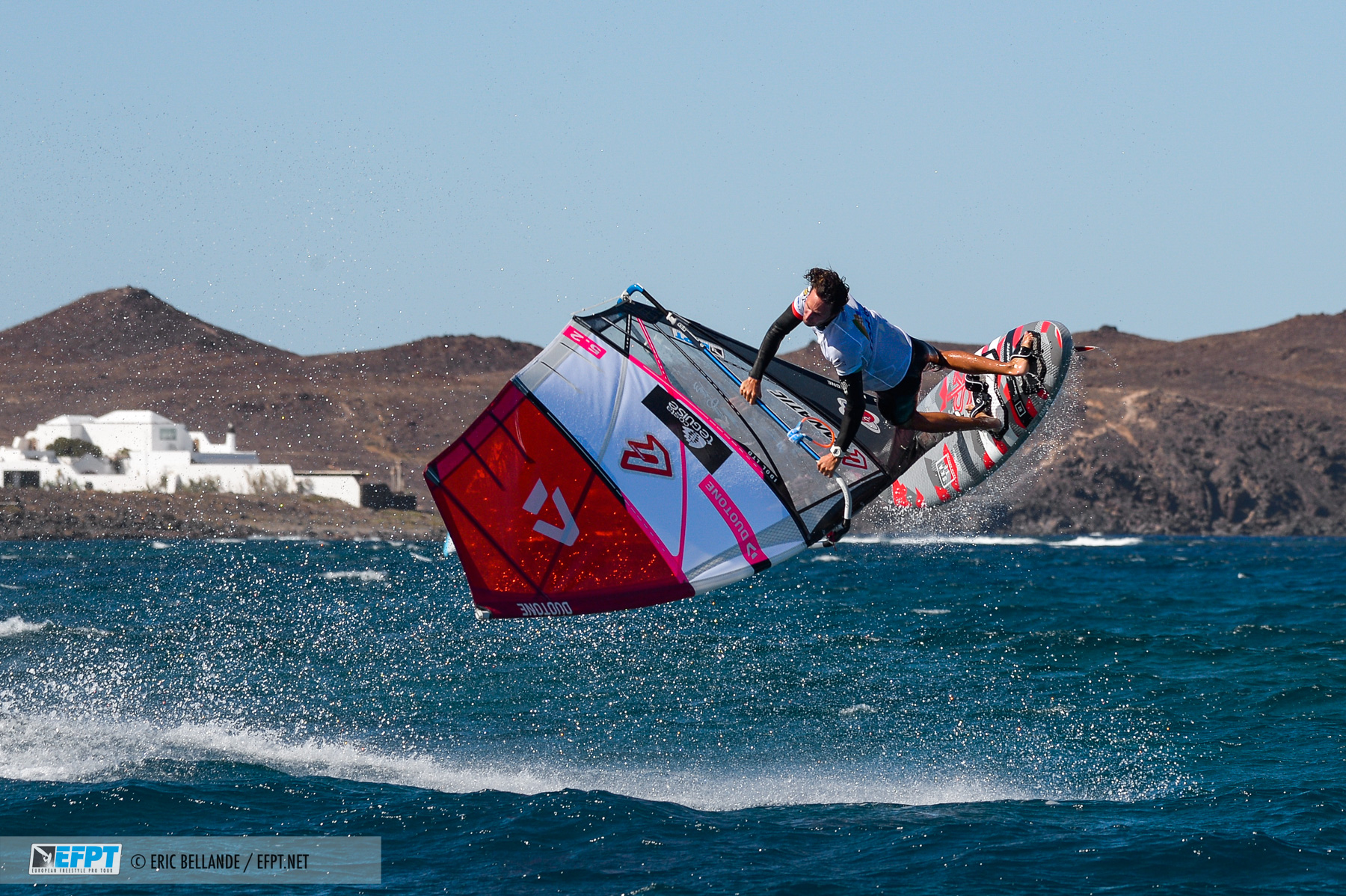 Both riders put down a great show, landing double moves coming in to the beach and huge powermoves on the way out. Caers could defeat Bosson by three points which led to the big superfinal, where Yentel could improve his highscore from the previous heat for one point. Caers landed a pasko, culo and shaka on porttack and an air funnel burner, double burner and spock culo to count on starboard. It was pleasant to watch the two riders to fight for the first place. However it had been Caers to secure the final event win here at the EFPT Lanzarote. It had been a bit of a deja-vu from the previous year, where Adrien Bosson managed to claim victory in the single, but couldn’t defend his place against Caers in the double. 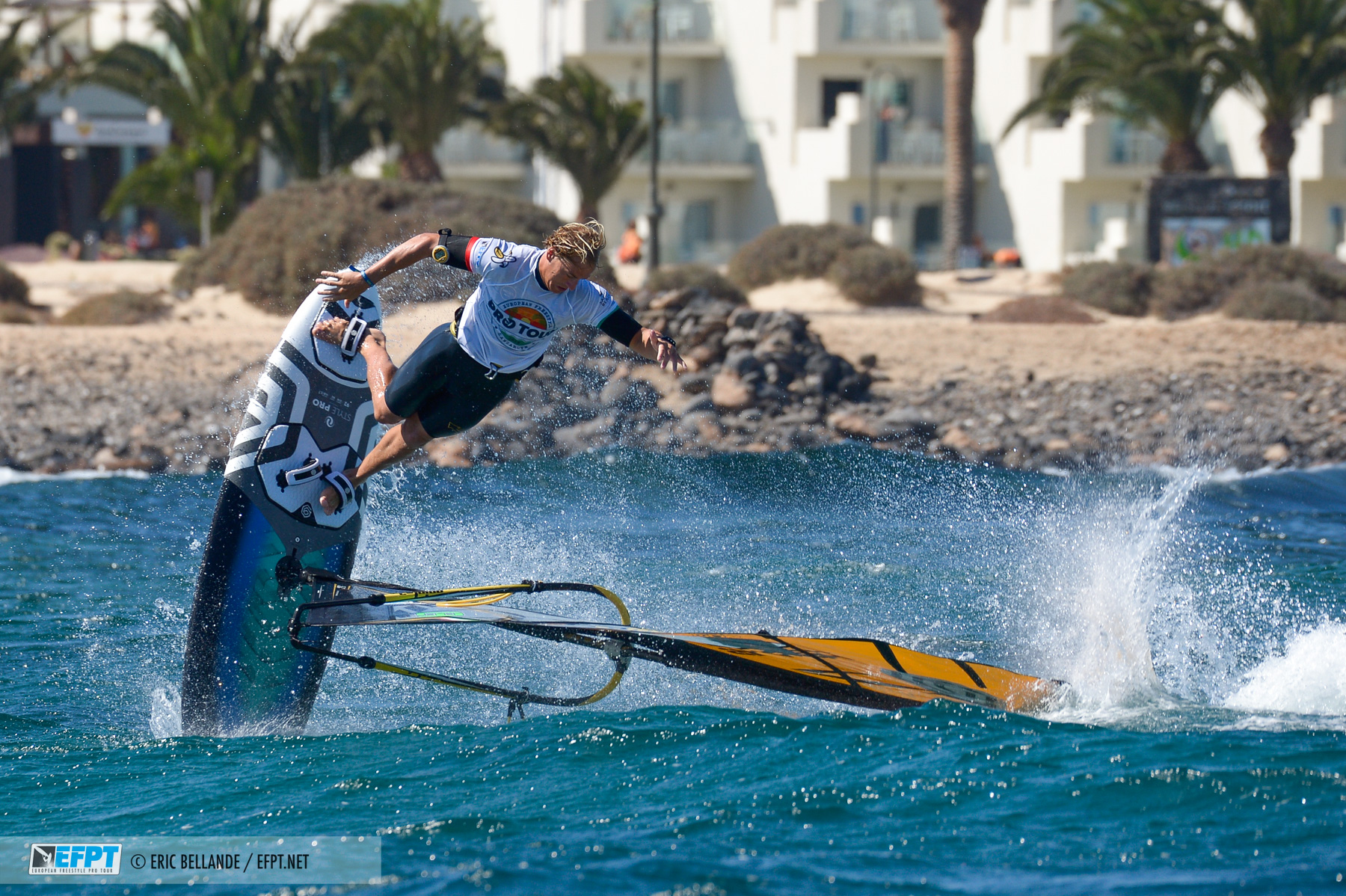 After winning the first freestyle event in Costa Brava, followed by the first place in the EFPT Spiaggia Lunga, Yentel Caers claims the third victory on the EFPT in 2019. With Antony Ruenes and Adrien Bosson mixing up the ranking, former placed second overall Jacopo Testa and third Davy Scheffers will have no chance to overtake Caers on the home stretch for the EFPT title this year. So even with one event to go in DAM-X in the beginning of October, Caers will be the EFPT champion of 2019. Yentel Caers stated:
‘Actually I don’t know what to say. I am just super happy. Lanzarote has been amazing, it is one of my favorite places, I really enjoy it! Winning here the second time in a row is amazing and being the European Champion for the first time is also…I don’t know what to say! Thank you so much!’
After the anouncement of the winners, Caers has been showered with champagne by his fellow competitors, all in front his friend and mentor Steven Van Broeckhoven, who couldn’t hide his emotions seeing Yentel winning the title. 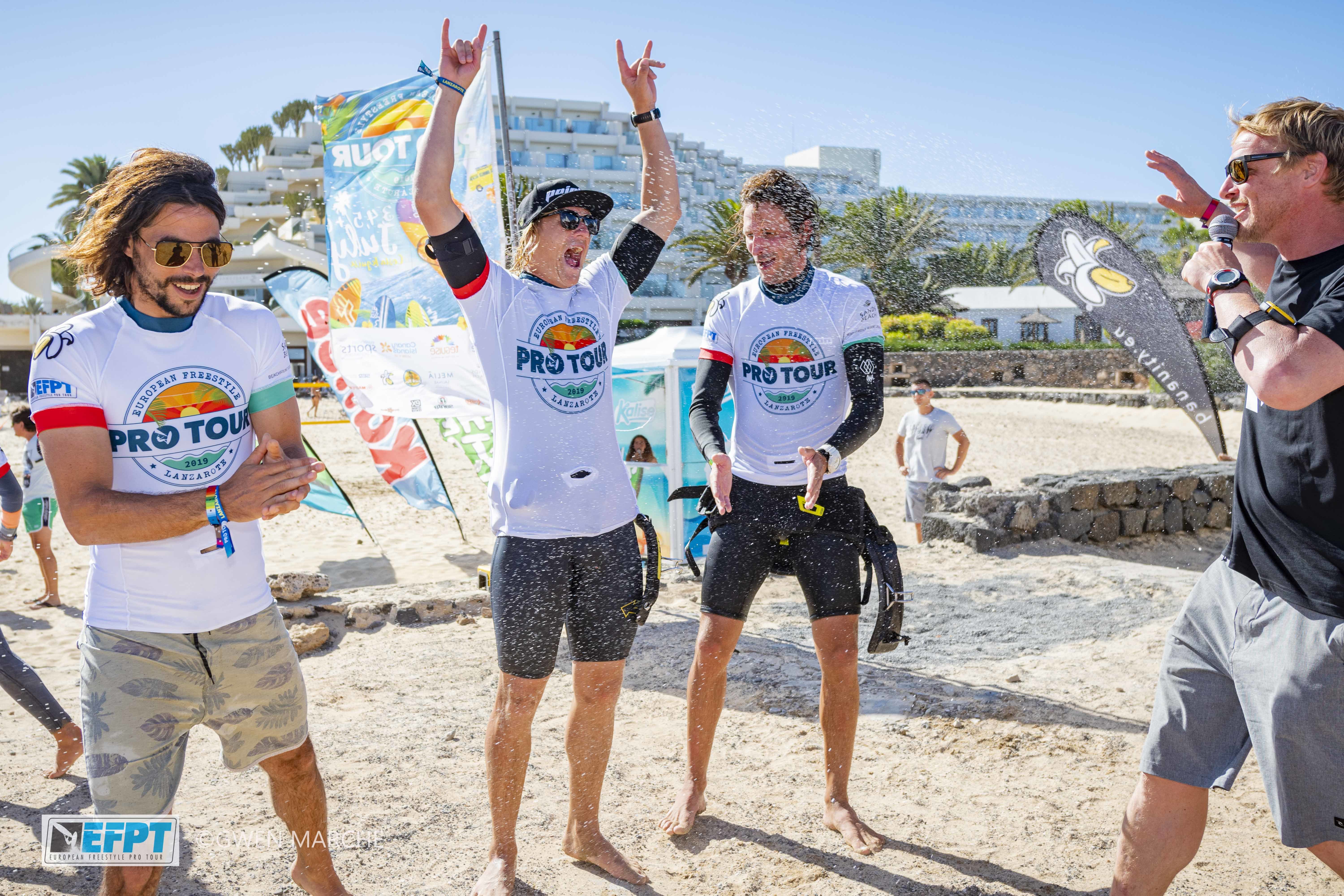 After the third event of the season, Jacopo Testa still stays in second followed by Davy Scheffers being closely followed by Giovanni Passani. Even though the overall title is safe, there might still be a mix up in the remaining positions, so the hunt for EFPT podium positions remains exciting.