Now that the world is slowly coming to a standstill because of the coronavirus, it’s time to dig up some windsurf action from the world wide web for all of you to enjoy. In this article you find a curated selection of some of the best windsurf videos available online, from golden oldies like RIP and Rave to modern-day classics like The Windsurfing Movie II and Cabeibusha – the Curly Gem. More than 10 hours of entertainment to combat quarantine and keep the spirits high. Stay safe out there, happy viewing!

What: The most famous windsurfing video of all time, featuring the King of windsurfing, Mr US1111. Watching this makes you want to sell all your belongings and move to Hawaii (maybe wait until after the crisis though; they won’t let you in anyway). A VHS classic, ripped (haha) for next generations to enjoy online.
Quote from the man himself (2013): ‘I wanted to make a video that captured Hawaii and the great windsurfing spots there. The focus was on using good cameras and good music and I was happy with the result. The video sold better than I thought and to this day people still come to me and tell me how many times they have watched RIP. I am thinking about making it a modern version: RIP 2, just for fun. A kind of revision. We will see!’
Famous for: Massive jumps on racing gear.
Riders: Robby Naish and friends.

What: Web series featuring Kauli Seadi and friends sailing in Chile, Cape Verde, at home in Brazil, Maui, Jaws and the PWA events.
Interesting fact: Originally meant as a DVD, Novela das 8 – named after a Brazilian soap – was brought out by umi pictures in 2010. Dvd sales were down, streaming wasn’t there yet, Kauli got squashed in between. Good for you, cause you can watch the entire series for free on Vimeo.
Riders: Kauli Seadi and friends.

What: This has got to be one of the most fluorescent windsurf movies of all time. The action, the music, the graphics, this is just awesome. Can we please get this vibe back into our windsurf movies? Please?
Famous quote: ‘I see so many sailers that go out and every time they pass you they’ve got this scowl on their face, and they’re like grrrrrr. It’s like: what’s the purpose? If I wanna have a scowl on my face I’ll go get a pickaxe and I’ll go, you know, dig a trench, and then I’ll have a scowl’ – Laird Hamilton
Riders: Rush Randle, Anders Bringdal, Mark Angulo, Laird Hamilton, Björn Dunkerbeck and more.

4. Wind Legends – The History of Windsurfing

What: Your favourite history lesson. Forget the ancient Greeks, Jules Caesar, Columbus or Napoleon, it’s time to learn about the history of sailboarding. In four parts ‘told by the legends that rode the wind and waters of yesterday’, this movie takes us from the invention of our sport all the way to modern (2008) times. A must-see, albeit with a pretty stale voiceover.
Famous quote: ‘With as much controversy as civil rights, war and the death penalty, there were several claims to the invention of sailboarding, commonly known by its more popular name: windsurfing.’
Don’t miss: The outtakes at the end.
Riders: From Newman Darby, Hoyle Schweitzer and Jim Drake to Robby Naish, Björn Dunkerbeck, Antoine Albeau and the Angulo brothers.

What: Widescreen wave riding by Thomas Traversa and co, on not so average spots such as Skeleton Bay, Île aux Vaches and Nazaré.
Famous for: The moments you think ‘Hey, I’d hit that’, and many more when you don’t.
Riders: Thomas Traversa, Boujmaa Guilloul, Camille Juban, Leon Jamaer, Flo Jung.

What: The baddest riders, the raddest moves, shot from helicopters and jetskis… The Windsurfing Movie II (2010) continues where the already groundbreaking part 1 ended. This means top cinematography, an actual script, and prime windsurf locations such as Baja California, Tahiti and the Marshall Islands. ‘We follow Levi Siver on a global journey to discover new frontiers in windsurfing, and in the process find a deeper meaning in life.’ Or not. But then at least you’ll have seen some rad windsurfing shot from all possible angles, making you feel like you were there.
Famous for: The dream scene.
Riders: Levi Siver, Kai Lenny, Robby Naish, Jason Polakow, Keith Teboul, Mark Angulo, Brawzinho, Baptiste Gossein and more.

What: Classic wave contest (PWA) in Fiji from the nineties.
Famous for: Its look. It’s not the VHS recorder, nor the way this movie was ripped. The Namotu Wave Classic was meant to look like you took a drop of acid.
Riders: Robby Naish, Scott Carvill, Jason Polakow, Josh Stone, Björn Dunkerbeck, Anders Bringdal, Scott Fenton, Cisco Goya and many more.

What: Crusty old goat gets punished at Ho’okipa and teaches youngsters a lesson. Still relevant today.
Famous quote: ‘[One day] the crowd will have to have an intervention for the 75-year-old old guy that’s going out when it’s too big, still trying mutants… but he shouldn’t. And he’s dangerous and they keep peeling him off the rocks… ‘Mark you gotta go back down to Kanaha, I’m sorry. Your day at Ho’okipa has ended’, hahaha.’
Riders: Mark Angulo, Kauli Seadi, Brawzinho, Ricardo Campello.

What: Australian romantic comedy from 1986 about a guy (P.C.) who wants to win the world windsurf championship. *movie voice on* From the land down-under comes a splashy comedy that soars with action and adventure, flirts with danger, and swells with romance. So grab a board and set sail for the time of your life. *movie voice off*
IMDB plot keywords: surf | comedic | low brow | man wears eyeglasses | woman punches a man | apology | carrying woman over shoulder | f word
Featuring: Nicole Kidman as the rock singer who starts a romance with our windsurfer, but *SPOILER ALERT!!* as their romance blooms, sport, friends and the upcoming championship become secondary. ?

What: Highlight video of the 2019 Red Bull Storm Chase in Ireland. They say life starts at the end of your comfort zone. For some that’s a force 4 and sunshine, for Jaeger Stone, Philip Köster, Thomas Traversa and the rest of the crew it’s when fingers start freezing and you can’t hold onto to your sail anymore…
Famous for: 131 km/h gusts and snow.
Riders: Ricardo Campello, Dany Bruch, Leon Jamaer, Adam Lewis, Robby Swift, Philip Köster, Thomas Traversa, Jaeger Stone.

What: Just when you thought it couldn’t get any stranger, brace yourself for Jason Prior and Cisco Goya’s funniest home videos. I think this was from the time Jason Prior was still doing LSD. And thank god for that. Next level weirdness mixed with Maui windsurfing action.
Watch if you liked: Bill & Ted’s Excellent Adventure.
Riders: Jason Prior & Francisco Goya, as well as the usual Ho’okipa suspects from that time Robby Naish, Jason Polakow, Cesare Cantagalli, Nik Baker, Björn Dunkerbeck, Robby Seeger and Mark Angulo (who also has a cameo).

What: From Double Or Nothing it’s only a small step to Balz Müller. His Instagram bio (@radiculo) reads ‘professional funboarder experimenting with foils fins and wings’, and fun is what you get. Balz mixes that nineties flair with ‘twenties’ skills and is not afraid to experiment, both in windsurfing and editing. In his latest clip, he conquers the violent winter winds at the Urnersee – 3.3 action at its best!
Quote: ‘This video is from a violent föhn storm on the 20th of December 2019. The wind whipped the water with over 120 km/h, pebbles were rolling and even flying through the air. Especially the whirlwinds, affectionately called wind devils at the Urnersee, seemed ready to suck me in from the water surface. At one point, one of these devils spun towards me and ripped the sail from my hands. Surrounded by white water I could do nothing but hold on to my board and hope my gear and me wouldn’t get lifted off. That day I surfed the strongest constant wind of my life so far, and had the best surfing session of the year!’
Riders: Balz Müller and friends.

What: North Sails’ answer to the fluorescent Neil Pryde vids from the nineties. Instructional video with classic emotionless, staccato voiceover (‘Where your head goes, your body will follow’, ‘Break the rules, don’t switch your stance’). A mix of rock and synthesizer music, obviously.
Warning: ‘What you are about to witness is a virtual reality instructional video with the intent of teaching advanced moves through visual impact to avoid confusion caused by too much talking…..’
Riders: Sean Ordoñez, Dave Kalama, Eric Groenewoud, Jan Boersma, Martin Esposito, Leon Bellenger.

What: Even though we only have the trailer for you to watch, this Top 19 wouldn’t be complete without an André Paskowski movie. You know what, we’re going to make it two. Minds Wind Open was Pasko’s second feature film (2011), starring (then) next gen windsurfers Philip Köster, Gollito Estredo, Brawzinho, Ricardo Campello, Victor Fernandez and Kauli Seadi. Making this movie André’s goal was to ‘put windsurfing action in a nice, artistic light, reminding everybody how beautiful windsurfing is and how much quality it adds to our ‘normal’ lives.’ We think he reached his goal.
Famous for: Bullet time backloops.
Riders: Victor Fernandez, Philip Köster, Kauli Seadi, Ricardo Campello, Brawzinho and Gollito Estredo.

Unfortunately, we only have the trailer. You can still order the DVD here.

What: Touching portrait of multiple freestyle world champion Gollito Estredo by his ‘big brother’ André Paskowski. The movie highlights Gollito’s inspiring story, from his humble childhood to becoming 5x world champion. Shot at Gollito’s home and birthplace El Yaque, Margarita and on the road in Sotavento, Fuerteventura, and Tarifa, Spain.
Quote: ‘He’s just like a cat. Any way you throw him up into the air, he’s always gonna come down on his feet again.’
Riders: Gollito Estredo.

16. From Cape Town with Love

What: Team Fanatic switch roles in this entertaining video shot by Enjoy the Soup in Cape Town, 2013.
Also known as: The episode where Alessio Stillrich learns how to (not) drive a car (and burns the clutch).
Riders: Klaas Voget, Max Matissek, Alessio Stillrich, Max Rowe.

What: Canary Island boarding guide, featuring local tour guides Björn Dunkerbeck, Jonas Ceballos, Belgian ripper Bart David and a young Dany Bruch. The vibe of a surf trip and a soundtrack that makes you want to get out there and bust a move, or two.
Fun fact: Even though Bart David has no cartilage left in his ankles (nor dreads on his head), he still rips at his home spot El Cabezo in Tenerife when the wind is up and the swell is pumping. Without footstraps, but still flying high.
Riders: Dany Bruch, Jonas Ceballos, Bart David, Marcos Perez, Stephane Etienne, Vidar Jensen, Orjan Jensen, Björn Dunkerbeck, Dario Ojeda.

What: Windsurfing.tv’s Send iT Sunday combines two of our favourite things: videos of people getting hurt and windsurfing. What’s not to like?
Famous for: Seeeeeeeeeeeeennnd iiiiiiiiiiiiiiitt!
Riders: All of us – we’re all kooks!

We’re finishing this Top 19 with some positivity from the ever-smiling 100-time world champ Sarah-Quita Offringa. The best medicine for corona besides going out on the water yourself (okay, and an actual vaccine).
What: Film portrait about Sarah-Quita Offringa produced by German filmmaker Julian Robinet. Together they travel halfway around the globe, visiting Australia, Aruba, Iceland as well as a bunch of PWA stops to document SQO’s fight for the world championship title.
Specifically made for: Viewers who are not familiar with the classic windsurfing scene, meaning you can watch it with the entire family – which would be great if we didn’t have to keep two arms lengths away from each other. Oh well…
Riders: Sarah-Quita Offringa and friends.

Still want more? Here’s a video of the keyboard players of Dire Straits blasting around on their fluorescent windsurf kit in the UK, some single fin perfection from Josh Angulo in Cape Verde and to finish things off, Point Break the Windsurf Edition. 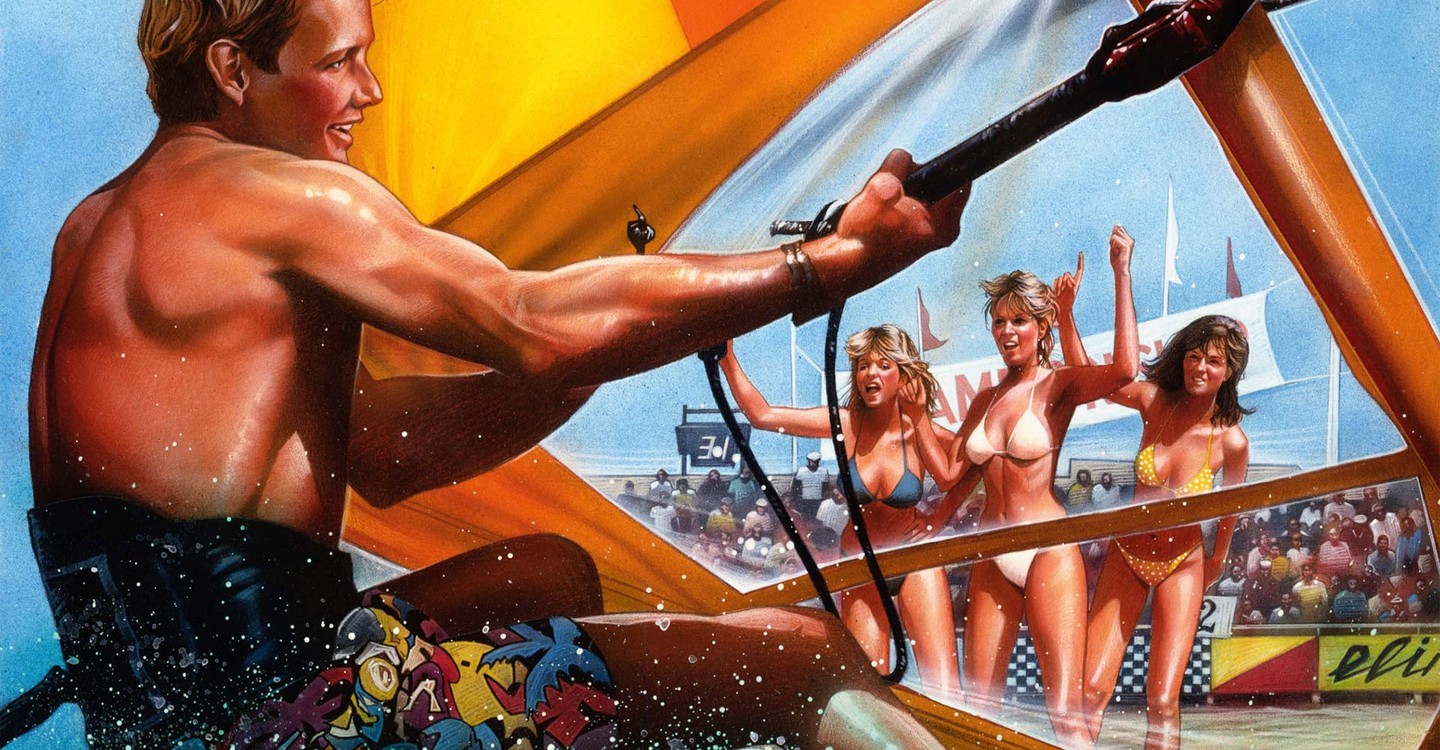